Gira knows food – and most of the actors in the European food chain. We operate in the drink and food sectors and the food-based retail chain throughout the whole of Europe and worldwide in some product sectors such as meat, fish and dairy.

Dairy in India has also shown its resilience to major crisis

Indian dairies managed the Covid-19 crisis quite well through processing considerably more milk than usual and adapting their product portfolio.

India had to face a five-week lockdown in spring 2020, followed by partial restrictions in a few states in early September. The crisis had almost no impact on the volume of milk collected: no milk was thrown away. But at the same time, demand faced a major downturn, with the informal channel being completely stopped for three months. This informal channel is immense as it includes all the confectionary shops and small businesses like tea stalls. In India, this informal channel procures 20% of total milk production. 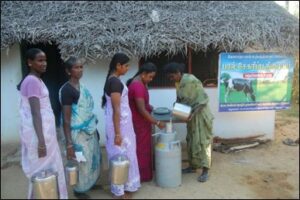 Initially, the supply chain had to adapt to process more volumes, with dairies procuring a large part of the milk, which was in addition to their usual procurements (instead of being sold through the informal channel). Part of the milk not sold through the informal channel was also consumed on-farm, with families returning to villages for lockdown.

Then the dairies had to adapt a second time and change the product portfolio. In India, drinking milk is by far the main product, representing 48% of fats and 59% of protein uses (of the milk collected by dairies). With the lockdown, and unlike mature markets where we saw an increase in drinking milk consumption, industrial production of drinking milk dropped because more consumers remained in rural areas. With 12-15% more milk and less demand for drinking milk, dairies had to switch to commodities and therefore produced more fat (ghee) and SMP.

Ghee in India is used extensively either for cooking, as a topping on bread or during religious ceremonies. Unlike butter, it is kept at ambient temperature. Demand for ghee produced by dairies is increasing because consumption patterns are changing and the young generation tends to purchase its own ghee rather than produce it, even if production at home is still widespread. Consequently, demand for ghee, and for butter to a lower extend, increased.

However, it appeared that the SMP market situation was a bit trickier. In 2020, India produced an estimated 1.17 mios t of SMP, +90% on 2019! India ended 2019 with a low supply situation and a high price, which resulted in dairies producing significantly more SMP in the first part of 2020. They did not have too much hope for exports, as Indian SMP was not competitive on the global market and the foreseeable issue was either to export with the help of government subsidies, or to release volumes on the domestic market, again with government money (to school milk programs or fragile populations due to the Covid-19 crisis). The second solution seemed more realistic, considering political concerns (better acceptance of subsidies for domestic consumption rather than for exporters) and logistic issues due to Covid-19. But market conditions changed in Q4 2020, with global SMP prices increasing more than expected by the industry and India becoming able to export its SMP to neighboring countries at a competitive price without subsidising!

We can draw two conclusions from India’s experience:

To keep up to date on our most recent news, follow us on our Linkedin page at Gira – A Girag & Associates Company.